“I am a Christian, I am dying today.”

Monica Dra and her husband heard the marchers outside their small home in Nigeria on July 26, 2009. They heard the chants of “Allahu Akbar” and wondered what the night would hold for them and other Christians in their village. HELP VOMEDICAL provide care to victims of persecution like Monica Dra.

“We had heard rumors all night that there were going to be problems,” Monica told VOM, “and now I could hear them walking and slaughtering people as they went.” Monica’s husband, Daniel James, grabbed her, and they ran outside to escape the radical Muslim mob. But the radicals grabbed Daniel and hacked him to death with a machete. Monica began to run, with her Bible and hymn book tucked under her arm. But members of the chanting mob grabbed her and began striking her with machetes. Seeing a cross on a chain around Monica’s neck, a militant began to chop at her neck, nearly decapitating her. 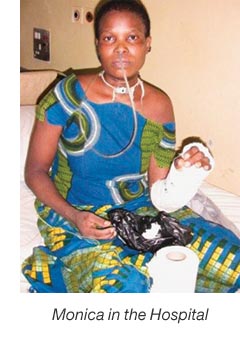 By the time Monica got to the hospital, she could only breathe through the gaping wound left by the lethal blade. “I thought, ‘I am a Christian,'” she said. “I am dying today.” But Monica didn’t die. After six surgeries to repair her throat and close the wound in her neck, doctors were able to save her voice.

Through VOMedical, Monica, a poor widow with a 5-year-old child, received excellent medical care and post-op follow-up. Thanks to generous donations from VOM supporters, Monica is among the more than 600 Christians who have received medical care after being injured because of their Christian faith. Monica now needs only one more surgery to regain her normal speaking voice. “Now that I have my strength back, I have forgiven my attackers,” Monica said. “Now I have more courage to serve the Lord much more.”

We don’t know where the next attack will occur. Nigeria? Indonesia? China? But VOMedical is committed to serving those who are injured by acts of persecution.

For those in bonds, The Voice of the Martyrs

If you would like to view a list of resources on the persecuted church and online specials from Voice of the Martyrs, please visit www.VOMBooks.com.

The Gospel – Eric Ludy on Vimeo